Many years after finishing Lilac Girls, I was surprised to read in a medical journal an incredible article, which features Nina Iwanska, the woman who inspired my Polish character Kasia in Lilac Girls. The article was written by Stafford Cohen, MD, Associate Clinical Professor of Medicine at Harvard Medical School and told the story of how a German doctor, Dr. Walter P. Schreiber, WWII Chief of Medical Science in the Nazi Supreme Command, came to secretly work in the US after the war. Captured by Russian troops in 1945 and held prisoner in various POW camps, Schreiber had not stood trial with his fellow doctors in Nuremberg and US Army intelligence brought him and his family to the US to work. They were part of Operation Paperclip, which brought at least sixteen hundred scientific and research specialists and their families, many with Nazi ties, to the US to work on top secret projects like germ warfare and space projects. 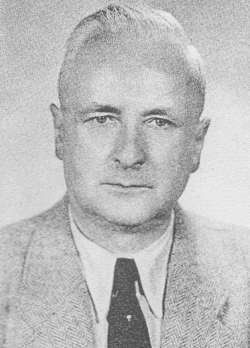 When a group of doctors at Beth Israel Hospital in Boston, led by Dr. Leo Alexander, a longtime friend of Caroline Ferriday, discovered that Schreiber was in this country working for the US government, he gathered a cadre of fellow doctors to ring the alarm.

Alexander, who had helped prosecute Nazi doctors at Nuremberg, knew that Schreiber had worked as Chief of the Sanitary Division of the Military Medical Academy, which oversaw the experiments conducted at all the Nazi camps, everything from the Polish womens’ ersatz sulfa drug experiments to lethal injection and jaundice experiments. When the US government objected to Alexander’s claims, saying Schreiber had been carefully vetted, was in no way guilty of war crimes, and that they needed his expertise for their top secret projects, Leo Alexander contacted The Boston Globe. The story became public and though Alexander presented evidence from the trials, which mentioned Schreiber by name, the Nazi doctor swore he had nothing to do with Ravensbruck or the experiments. Public opinion was split. Some accused Alexander and the other Jewish doctors of conducting a witch hunt against Schreiber.

Enter Nina Iwanska. Nina was in the US in 1952 as a guest of Caroline Ferriday, for three months of treatment at Beth Israel Hospital to repair damage Nazi doctors and done in performing experiments on her and seventy one other women at Ravensbruck Concentration Camp for women. She was visiting Boston from Paris where she lived and worked as a Radio Free Europe reporter. The FBI interviewed Nina about Dr. Schreiber–did she remember anything about him from her time at Ravensbruck? She remembered quite a lot and explained that Schreiber had been prominent at Ravensbruck and oversaw many of the experimental operations performed on her and many other healthy women there and that Dr. Gebhardt, who was executed for his part in the experiments, reported to Schreiber. She had even seen Schreiber at a conference held at the camp to discuss the experiments performed on the young women.

Soon the Pentagon was flooded with bad publicity over Schreiber and promised to drop him from the Air Force payroll and deport him. They did neither, until months later Schneider asked to go to Argentina to live with his daughter. Presenting Schreiber as “an innocent victim of adverse publicity instigated by Jews,” Operation Paperclip staff secured him a good job with the Argentine government. Schreiber joined thousands of his fellow Nazis including Adolf Eichmann and Josef Mengele enjoying their post war crime lives.

Below are a few of the newspaper articles. Isn’t it amazing all the hidden history we keep finding, so many years later? Caroline Ferriday must have been so proud of her friend Nina. 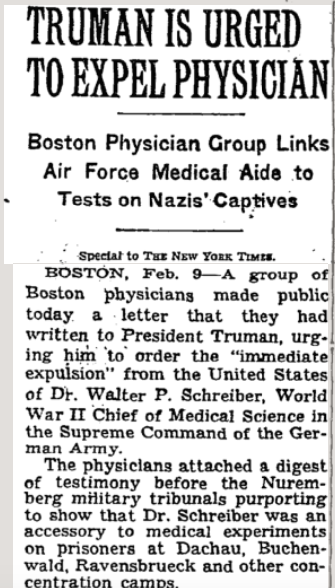