I’m still pinching myself since I was lucky enough to spend time with with one of my heroes, Stanislawa Sledziejewska-Osiczko, at the seventieth anniversary of the liberation of Ravensbruck Concentration Camp. Known as Stasia to her friends (and everyone who meets her instantly becomes her friend) she’s a woman I’d only read about while researching my novel Lilac Girls. Stasia and seventy other young Polish women were used as experimental subjects by Nazi doctors and became known as the “rabbits” or “guinea pigs.” Just 14 years old when she was chosen to undergo the experiments, she was one of the youngest to be operated on at Ravensbruck Concentration Camp, her leg surgically opened and infected with tetanus and gangrene, broken glass and dirt in order to test the efficacy of sulfa drugs. There are only five survivors of the experiments alive today. 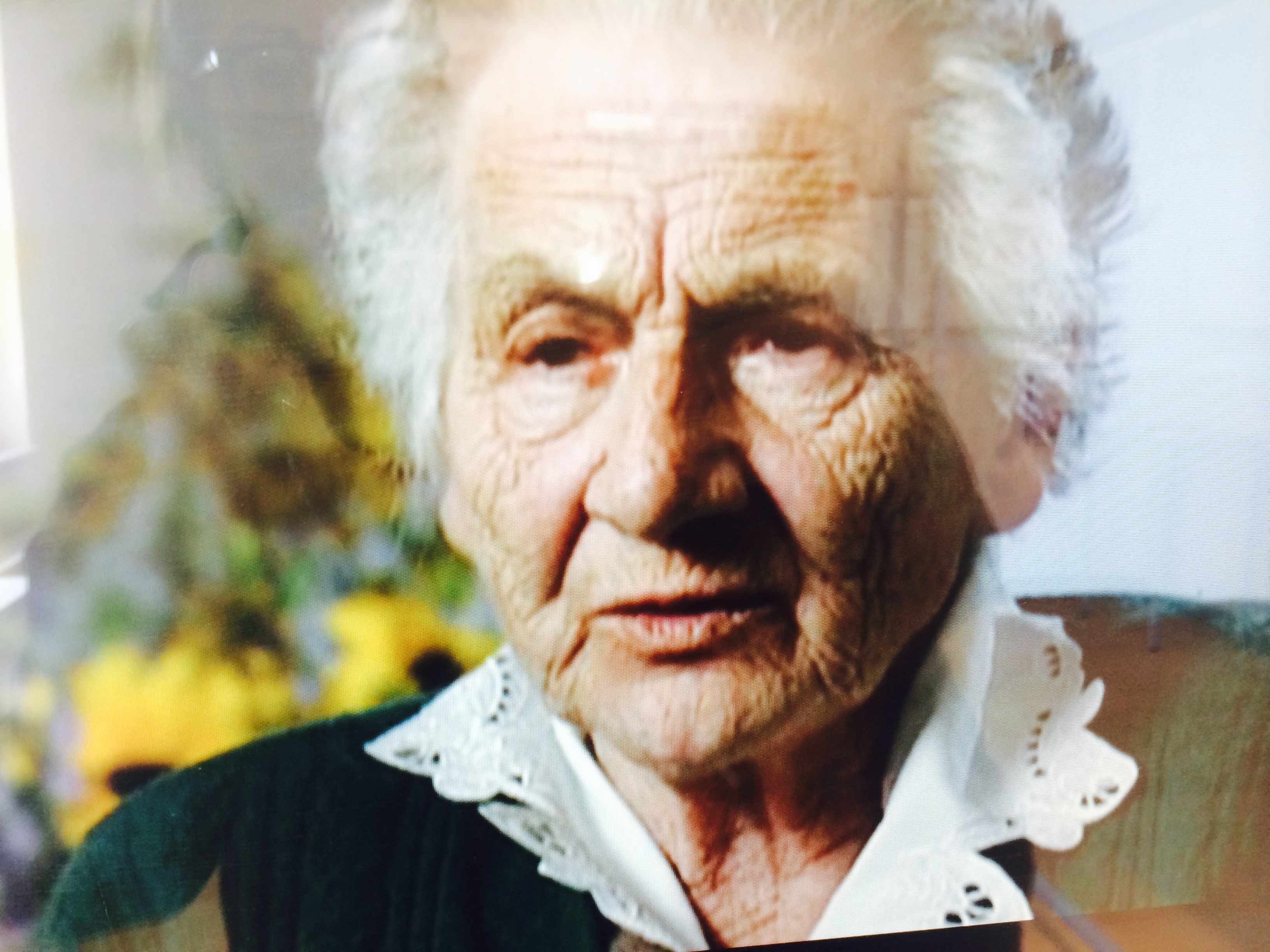 I was at the camp with my friend Stacy Fitzgerald who is shooting a documentary on the Ravensbruck Rabbits and got to hear Stasia’s stories of being hunted by the camp authorities once the Nazis realized they were losing the war. She told how the camp guards went block to block searching for the survivors of the medical experiments in order to eliminate the evidence of their crimes. The rabbit’s fellow prisoners of all nationalities rallied around them. They hid the girls, often by exchanging numbers with them or sneaking them into the typhus block where they slept among the dying inmates. This was a safe place since the camp staff did not enter the typhus block, afraid they’d contract the disease.

“Finally we dug holes under the blocks and squeezed ourselves under there,” Stasia said. “We could hear the dogs searching for us. It was terrifying.” 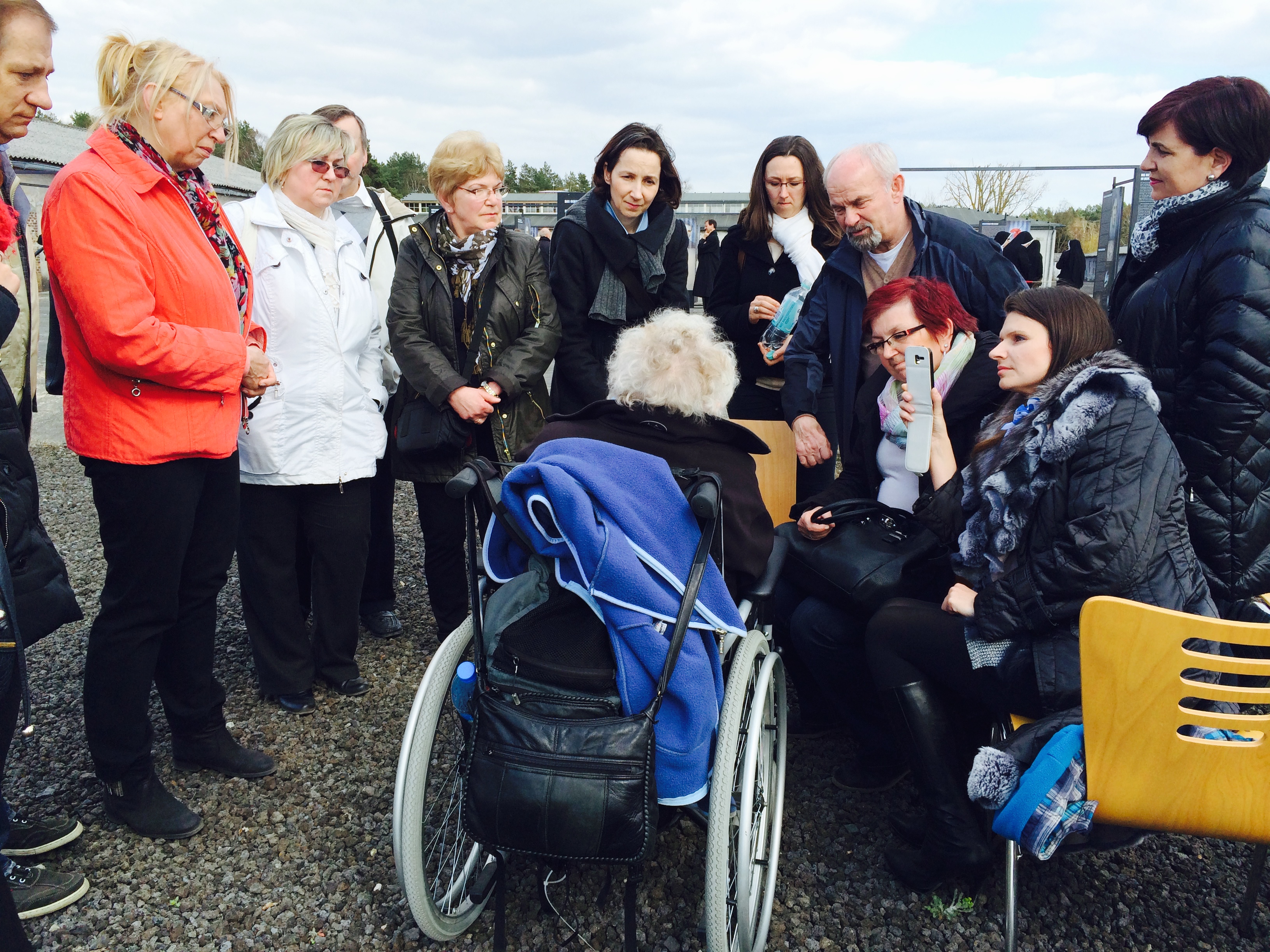 Today, Stasia radiates positive energy as she’s pushed across the gravel in her wheelchair, but isn’t afraid to share anecdotes through our translator.

“See these sharp stones?” she said. “They made us walk on them in bare feet. We only had shoes in winter.”

A true celebrity, crowds followed her wheelchair wherever she went in the camp.

A group of teens hovered nearby and a brave girl approached Stasia.

The girl hugged Stasia and neither let go for  several seconds. It was one of my favorite moments all weekend. Who wouldn’t want to salute a woman who withstood the most heinous medical experiments, evaded Nazi execution at Ravensbruck and returned to Poland after the war to deal with Stalin’s occupation? Post war Poland was difficult for the women, since many were still very sick from the wounds to their legs, but the German government refused to recognize Poland as a country and would not pay the women compensation, something Caroline Ferriday helped them fight. 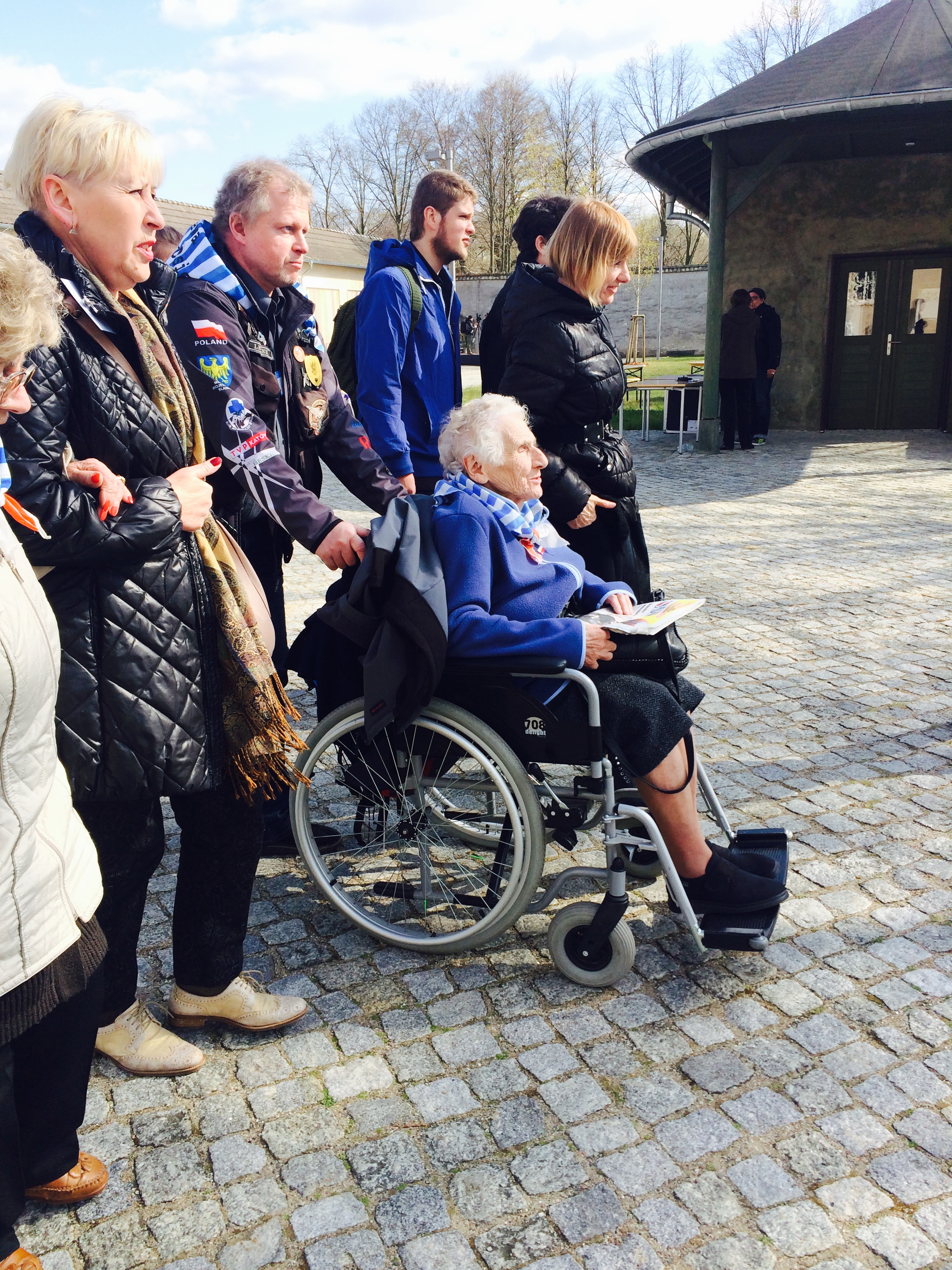 I was happy to see that a group of Polish motorcyclists have befriended the Polish survivors. Each member wears the blue-striped survivor kerchief, emblazoned with the red triangle the Polish political prisoners once wore, printed with a survivor’s name and camp number and acts as a helper to that woman. 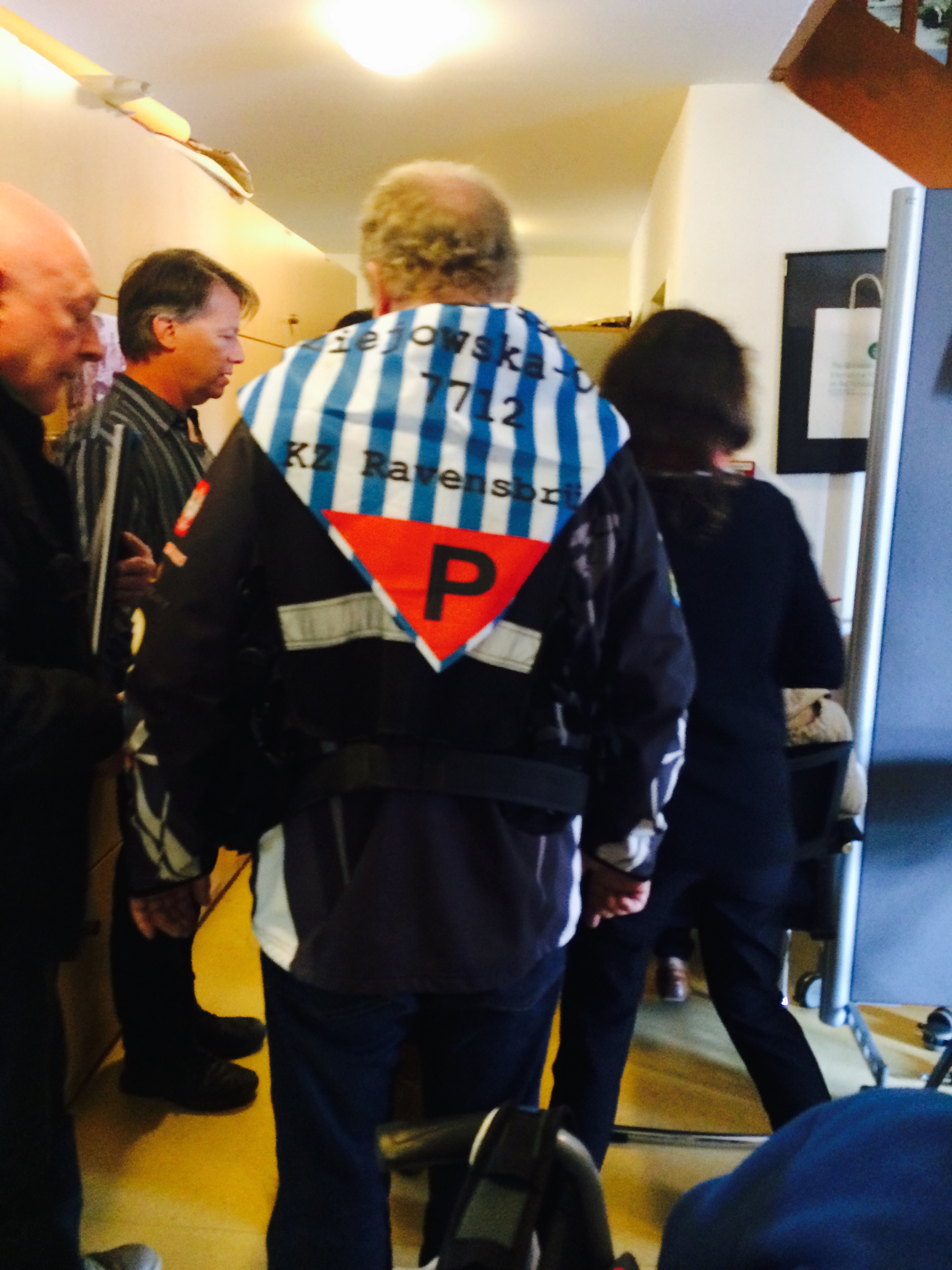 Stasia is lucky to have Leszek Rysak, above, as her helper. A history teacher and all around great guy, Leszek calls Stasia “auntie” and dedicates a large part of his time to helping her. 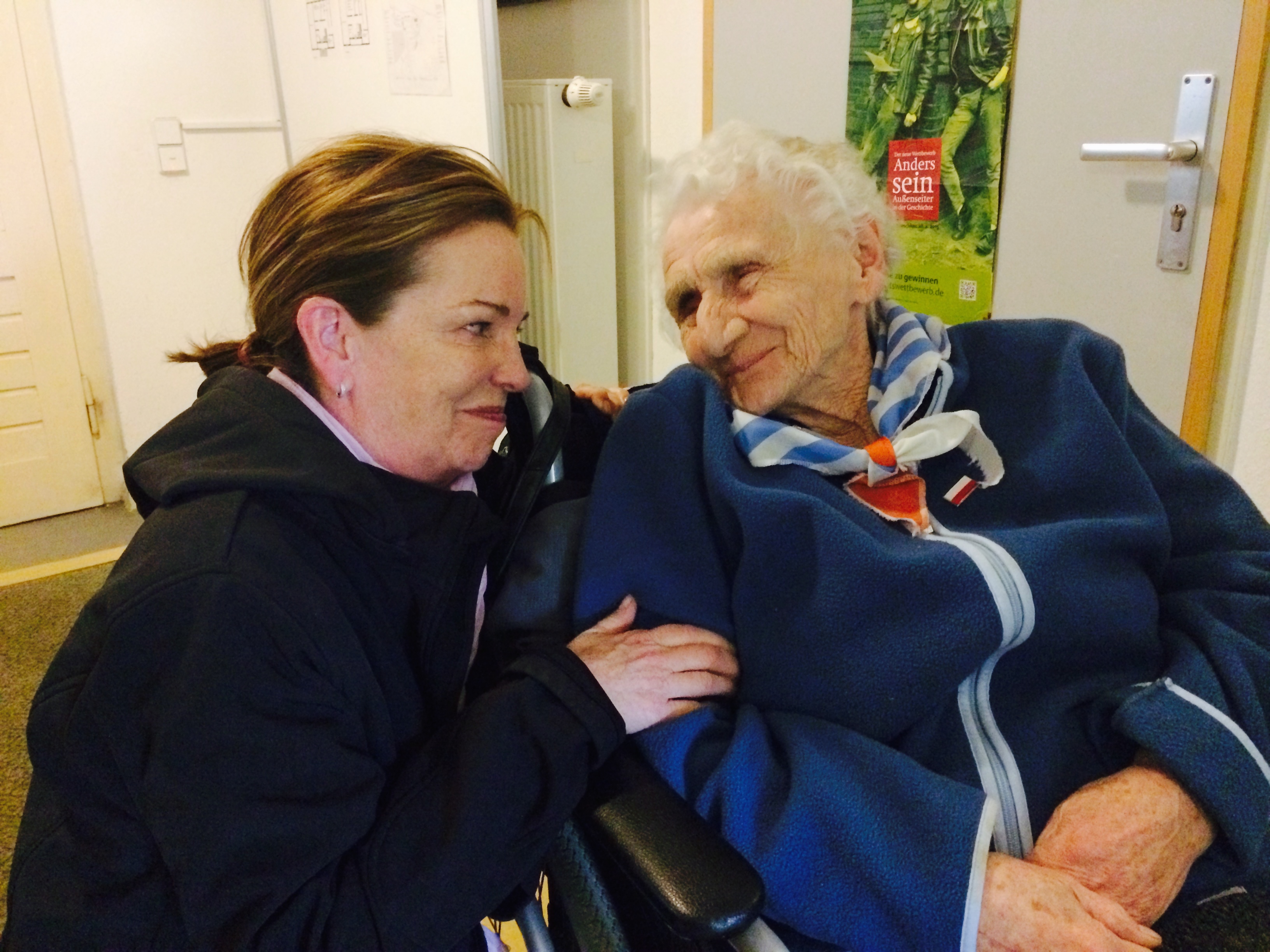 Meeting Mrs. Sledziejewska-Osiczko was a profoundly moving experience. I told her about Lilac Girls and she was happy to hear the world will soon know the story of what she and her fellow “rabbits” endured. But most of all I was thrilled to see the whole camp embrace her. With people today idolizing reality TV stars and viral internet sensations it’s refreshing to see a woman like Stasia in the limelight, finally getting her fifteen minutes of fame.

80 thoughts on “One of the last Ravensbruck “rabbits” tells her terrifying story.”